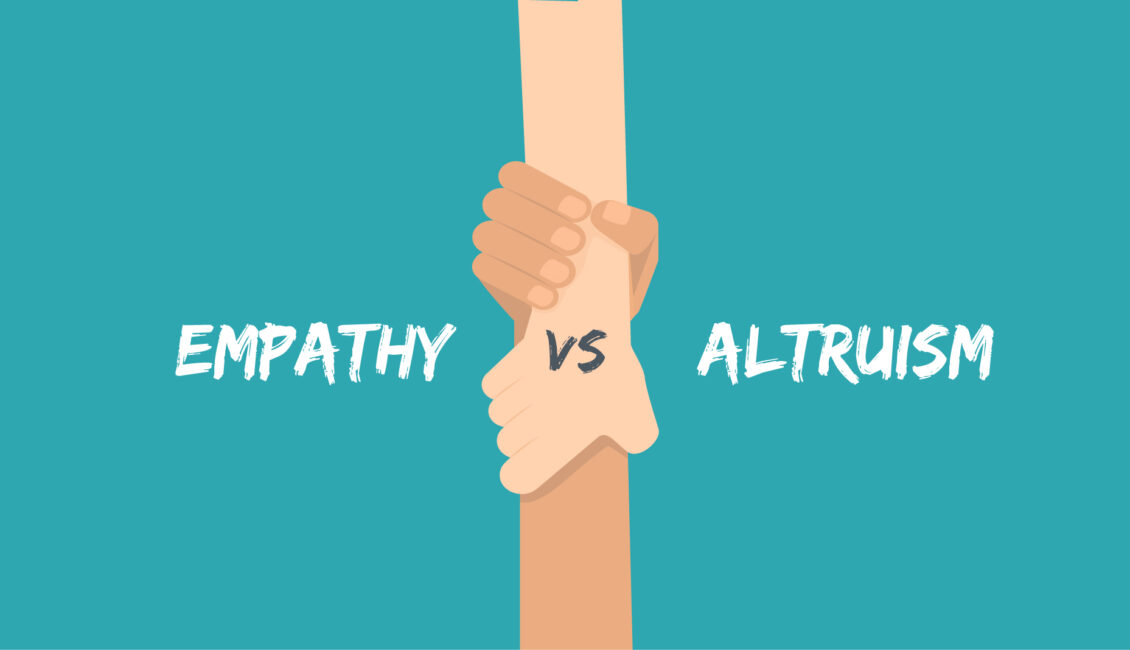 Empathy, Altruism and Everything in Between

Should we strive to be empathetic, altruistic or both? Are some people born more empathetic than others? Can we learn to be altruistic? Is one better than the other?  If you’re not used to reading about the ins and outs of sympathy, empathy, pity, compassion and altruism (and I am by no means an expert), buckle your seatbelts because we’re about to embark on the Idiot’s Guide* to all of the above.

*Written by an Idiot, that is.

Pity vs Sympathy: Is there a difference?

Let’s start by addressing some things people associate with empathy. Pity and sympathy are of the same vein – it is a sense of sorrow or discomfort evoked by someone else’s misfortune. Even though they denote the same response to a situation, in the English language the term “pity” is seen as a bit colder than “sympathy”. Pity is often viewed as feeling sorry for someone who is suffering pathetic or lowly circumstances, e.g. a person experiencing homelessness. Sympathy, meanwhile, is seen as more of a comforting or reassuring sorrow to share with another, like the death of a loved one. In both, you can gauge how someone is feeling – even though you might not have experienced that specific hurt yourself – and feel sorry for them. So, while they’re linguistically synonymous, they would be used in different contexts due to cultural factors.

Empathy, on the other hand, refers to the capacity to feel what another is feeling. It is the sharing of an emotional experience that is sad, joyous or otherwise. Though not tethered to any one emotion, empathy is most often employed in reference to the suffering or sorrow of someone else. To understand their feelings, the emotions that may be swirling inside them, the situation they’re in and the implications it may have on their present or future. Empathy is generally described as having two parts; cognitive and affective. Cognitive empathy is the ability to understand and identify with what someone is experiencing. This is the “being able to place yourself in someone else’s shoes” side of it. Affective empathy is when their situation elicits an emotional response from you, i.e., you are affected by it. It could be tearing up or feeling anger towards what happened to them.

Compassion extends beyond the aforementioned. It stems from all of the above, but  urges an individual to take action and reduce someone else’s pain or strife. As a result, compassion is often a driver for change and motivator of altruism. Altruism, boiled down to one sentence, is selfless behavior often prompted by feelings of compassion, empathy, sympathy and so on (but we’ll talk more about that in a moment). Equally, someone can feel compassion and not act on it, and altruism isn’t always a by-product of compassion.

It is important to recognise just how powerful compassion and empathy are. They have the ability to change social structures, cultural norms and more. By leading other individuals to feel compassion for disadvantaged people or communities, it promotes a tendency to help those people/members of those groups, as well as promotes positive attitudes toward their community as a whole. This means that, when it comes to battling dicrimination and prejudice, compassion and empathy are catalysts for change. An example that springs to mind is how Princess Diana was a fundamental in battling the stigma facing those affected by HIV/AIDS. Diana, a much loved public figure, was photographed shaking hands with HIV positive patients. In doing this, she dispelled the dangerous misconception that HIV could be transmitted through touch alone – a falsity that caused social outcasting of those diagnosed with the virus. In a simple, single compassionate act, she changed the discourse around a then-controversial subject toward a more positive and hopeful light.

Conversely, if our empathy extends to dangerous wrongdoers it will benefit the wrongdoer and, resultantly, may endanger the welfare of others. A random example could be protecting the identity of someone who committed a crime. They tell you about their hard start in life that led them to do such a thing and how they’re too young to go to prison. By not turning them in, the empath may unintentionally be hurting others. So, in rare and extreme circumstances, empathy and compassion could also threaten the objective of altruism, which promotes striving for the good of all others.

The word “altruism” stems from the French word altruisme, and serves as the antonym of egoism. The term was coined by French philosopher Auguste Comte and its basic principle is that no one has the right to exist for their own sake. Service to others is the only justification of our existence, and that self-sacrifice is his highest moral duty. True altruism is to do something in favour of someone else, to no benefit of yourself, with there never being an intention to benefit yourself, and at a cost to yourself. It means you would help anyone and everyone – not just people you know. You would risk your life for someone else’s safety, go hungry to feed them or go cold to keep another warm. There is no “I” in a situation – it is all about the betterment of the other person(s). Jesus Christ is often used as an example of a truly altruistic individual. However, because humans have an ego, many argue we cannot overcome that hardwiring and achieve true altruism.

Egoistic motivation to help doesn’t simply mean that people do good things just to make themselves feel better. For example, someone might be inclined to help someone in distress because it will prevent them feeling bad about themselves or tarnishing their representation in front of others. On the other hand, doing a good deed may be performed in order to gain approval from others. Or, a highly empathetic person may feel compelled to help the distressed person as it would lessen their own levels of sadness or distress caused by that situation. The ego itself is a topic for another day, but the main point is that we have a lot of subconscious reflexes that are in place to protect and stroke our own.

So, if true altruism is impossible for us to reach, what can we do? Quite simply, we can try to implement altruistic behaviours in our daily lives as much as possible. In order for an action to be deemed altruistic, we have to look at the aims versus the outcomes of the action/behaviour. If you do something to benefit someone else and for that reason alone, your aim was altruistic. If you get a “Helper’s High” as a result of it, that good feeling is secondary to your intention. Arguably, all altruistic acts result in the doer having some amount of satisfaction or pride, be it major or minute. Therefore, an act should not be written off as selfish simply because it includes some inevitable element of validation.

Likewise, if you do something only to make yourself feel better, to prevent shame or to gain admiration, then your intention does not align with altruism. Fundamentally, there is a difference between the average Joe Bloggs getting a Helper’s High from shepherding an old lady across the road, versus a politician latching onto her arm and parading her in front of cameras. Yes, the woman gets across the road safely in both circumstances, but she and her safety were central to only one of these stories.

How to Improve your Empathy Reflex:

How to Engage in Altruism:

So what should we strive to be?

Needless to say, pity, sympathy, empathy, compassion and altruism often blur and overlap. Understanding all of the ifs, buts and contradictions can be a bit laborious but the main takeaway is this: maximise your positive impact on others. We should promote altruism in our ego-centric society because the chance of us sabotaging ourselves entirely for the good of another is low (unless you are a true altruist which, again, controversial). Equally, those who are strong empaths should focus on channelling their emotional energy into action, but not to the point of self flagellation or sacrifice. We need to take the foot off the “individualism” pedal and view ourselves more like bees part of a hive. We need each other; now more so than ever. Do good for the sake of those around you and the world you live in. If the outcome of your empathy and altruistic intention makes you feel good, bask in that warm glow. There is no harm done.

I know I didn’t answer the question of why some people seem to be more altruistic than others – I truly feel this article is mind-melting enough. You can, however, check out Abigail Marsh’s brilliant Ted Talk on the subject here.