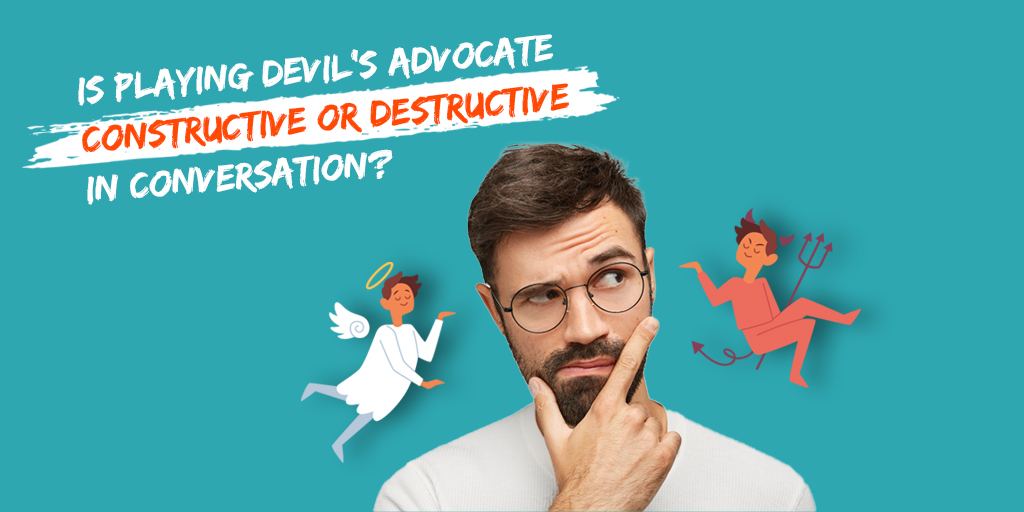 As the newly qualified teacher stands at the head of the classroom, explaining the rules of the next task, she is challenged by a disruptive pupil. That one pupil. The lesson would be perfect if it wasn’t for that one pupil. There’s no reason why everyone couldn’t complete the task in an orderly fashion but that pupil is bored. Sick of the same thing, different day. Suddenly, the disruptive mood infects the tentative calm and anarchy ensues. Calm is but a distant memory. The teacher screams in a futile attempt to regain order. This is the Devil’s Advocate.

I often played this role as a child. For no other reason than my own amusement. It was entertaining to challenge stereotypical ideas in school, especially questioning rules that seemed pointless. Why must I have my long hair tied up in a ponytail? Because I’m a boy? If this was a school for girls there would be outrage. Tying my hair up wasn’t an issue but I resented that I didn’t have a choice. Maybe I could change their opinion.

As an adult, a similar situation rears its head in conversation. When friends are chatting about the current COVID restrictions and are all in strong agreement over what a terrible year it’s been. The Devil’s Advocate rears his head. Whilst the rational part of me can understand that it has been difficult, why must we agree that the year is a write off?

“Don’t you think there’s been a tonne of benefit in isolation?” I’ve questioned and been met with reactions similar to what would be if I insulted their newborns. The point of this stance isn’t to annoy, (which unfortunately it quite often does,) but to provoke different points of view. It’s only healthy that we consider the alternatives.

We have become increasingly trapped in our little social bubbles that reinforce our current opinions of the world. We become stagnant. Close-minded. Unhealthy. In these cases, we need to be encouraged to think outside the box. For example, asking someone if posting a “black square” is helping the Black Lives Matter movement more than donating money to a charity that is directly working to help, is provoking. It challenges this idea that sharing posts is enough, that talking about helping is in any way equal to actually helping. Could you be doing more? “It seems like you’re doing this purely for social kudos.” Try this in your next conversation with your social influencer friends. Why do we assume that the way do life, is the right way? The only way.

In some instances, the position is played by a person hoping to ruin our ideas or make us feel small. If anything, this shouldn’t be taken as an offence but make us think harder about the position we stand in. Reinforce our opinion if believe or make us rethink if we are unsure. If it turns out we’re wrong, then that’s great too, we have gained wisdom. We will no longer bring our weak argument to the table of others where we will be ridiculed.

This idea isn’t about causing “trouble”, it’s about forcing people to think. To learn. To challenge. To wake us up from this passive robotic life where we follow trends without thought. Sure, it’s nice when people agree with our ideas but what do we learn from that?

Conversations With A Stoic