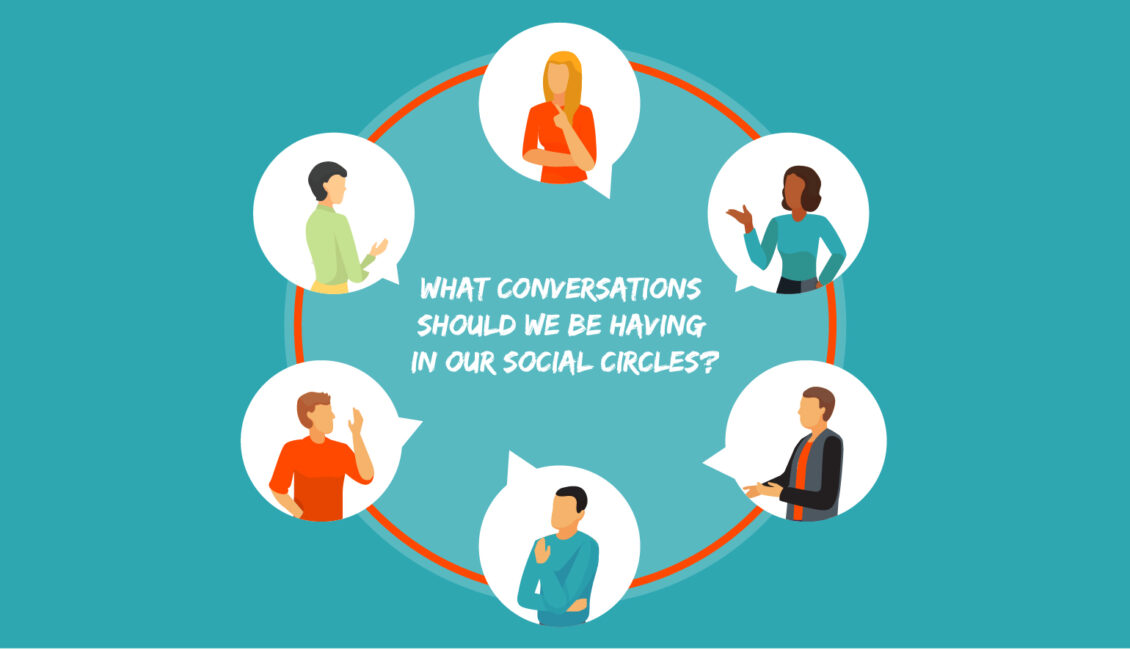 However, it is just as important (if not more) to have conversations with people who share different ideas. To actively have conversations about the more difficult things and the things you may disagree on. This needs to start at home – we need to call out our friends and family for using dangerous and discriminatory rhetoric. The thing is, it won’t always work and you won’t always change someone’s mind but, it’s worth it for the chance that you might. This will no doubt sometimes cause friction between people. You may even lose relationships because some people don’t like to get called out, but if there’s a chance to help someone unlearn behaviour that might harm someone else, then it’s necessary.

An interesting term I’ve heard being used recently is ‘echo-chamber’ and it means surrounding yourself with a little bubble of people who share the same ideas and thoughts as you. This is particularly dangerous for people who share harmful rhetoric and ideas – racist/sexist/homophobic etc. They are surrounded by people who share their ignorance and pass around fake news like it’s popcorn at the cinema. They are surrounded by people who cheer them on in their narrow-mindedness. This leaves no room for education or growth. I think that education is key in creating an equal, fair society and dismantling discrimination of any kind. And as Jane Elliot said “You’re not born a bigot, you have to learn to be a bigot. Anything you learn, you can unlearn.”

I was born with certain privileges and with these privileges come certain freedoms. I’m straight – I don’t have to worry about my family or friends disowning me because of my sexuality, I don’t have to worry about displaying affection with my partner in public and getting homophobic abuse thrown at me, I won’t get killed because of my sexuality, it is legal to be straight and I am free to get married in plenty of countries. I’m a light skinned South Asian – I won’t face the same discrimination and racism that darker skinned people will, we’re usually seen as the ‘model minority’ and I haven’t faced over 400 years of oppression. I’m able bodied  – I have all of my limbs, I don’t have to worry about accessibility whenever I go out, I don’t have to learn Braille or sign language to get by in life and I don’t have to have a guide dog or a walking stick. I live in a lovely house and have food and water and plenty of things that aren’t necessary to my survival.  I had an education and I’ve been lucky enough to see many parts of the world. I was born into the body of the gender I identify with. There are many others privileges that I could list but I would probably be here all night. The bottom line being – I’m very lucky.

I am also a woman of colour. I have faced racism and sexism throughout my life and I highly doubt that will stop any time soon. Trust me – it is a privilege to learn about racism instead of having to experience it. People get very defensive when you bring up privilege, they think the implication is that their life hasn’t been difficult but no-one is saying this. No-one is saying you’ve had an easy life but your skin colour/sexuality/gender/able-body hasn’t made it harder. It isn’t just about humans themselves, it’s about the systems, structures and institutions that exist with the sole purpose of serving a certain group of people. I think there’s a misconception about privilege – it’s not about what you went through in your life, it’s about what you haven’t had to go through in your life. It’s about a weight on your shoulders that you don’t have, a pain that you don’t have to go through, a trauma that your ancestors didn’t have to live through and an anxiety that you don’t have to face. You can be aware of your privilege and feel pain and trauma from your other experiences and everything else you have faced in your own life – these two thoughts are not mutually exclusive.

I bring up privilege because I think it’s so important to be aware of your own privilege whilst having important conversations. It’s important to use your privilege to amplify voices and stories from marginalized communities. It’s important to use your privilege to fight for people who don’t have it. It’s also important to hold yourself accountable for the things you’ve said in the past or the mistakes you’ve made and learn from them and be better. No- one is perfect; we’ve all said things that we regret and unfortunately we all have various internalised biases that we need to address, but if you’re willing to learn and change then that’s half the battle won because so many people don’t want to do the work or face their flaws.

The murder of George Floyd seems to have woken people up to the Black Lives Matter movement and I’ve seen awareness in people that I’ve never seen before. I’ve seen people have conversations and want to learn and educate themselves more than ever. Maybe it’s a mix of COVID, unemployment, social media or perhaps a higher level of empathy, because what happened to George Floyd was horrific, disgusting and terrifying but heartbreakingly, it wasn’t new. Black people have been oppressed for over 400 years and there are so many people who have been killed by police/ at the hand of white supremacists in history and in recent years. It’s horrific that it took a global pandemic for people to pay attention but here we are. As George the Poet said, “Imagine having to explain that your life matters.” Matters is literally the bare minimum. The bare minimum. We are having to fight for black people to be treated as human beings and to have equality.

This shouldn’t be hard.

I’ve learnt so much over the past few months and I’ve had conversations with my friends and my family that I’ve never had before. I hope that we continue having these conversations because the fight for equality is a long one and it will continue far beyond our lifetimes. There is no easy way out or easy fix for this. Posting black squares on Instagram is a great show of solidarity but if you’re not doing anything else in your life to educate yourself, or be vocal, or have conversations, or march, or donate or protest, then that little black square? It’s pointless. Some people are virtue signalling; they’re more concerned about looking like a good person and an ally instead of actually being one – performative activism is insulting. This is a life long journey and it will take work because there’s always more for us to learn.

It has never been easier to educate ourselves because the knowledge is at our fingertips and so easy to access. It is necessary more than ever to leave our comfort zones so we can grow. To read books, watch programmes or films about different experiences. To watch documentaries or read books about real history- not a white washed version. To follow people on social media that have a different story than ours, who come from a different background than ours. Especially when that experience comes from a marginalised group of people whose story isn’t often told. Conversation Salons allow this to occur in real life. You get to have conversations with people whose story you wouldn’t have heard otherwise –  to broaden your horizons, even widen your social circle. It may open your eyes to communities and backgrounds you have never had the chance to hear from or have conversations with. Empathy is key in fighting discrimination and conversation can cultivate empathy and enable it to grow.

Life can be cruel and it’s easy to feel helpless in a lot of situations but this isn’t one of them – we can try and do something about this. We have to create a better society, because even though our lives might not depend on it, other people’s lives do. We need to be the change – we need to break the cycle.

Call out ALL forms of discrimination because nobody’s free until everybody’s free.

Read More: Say It To My Face